This bill was orginally vetoed by Ky Gov Andy Beshear 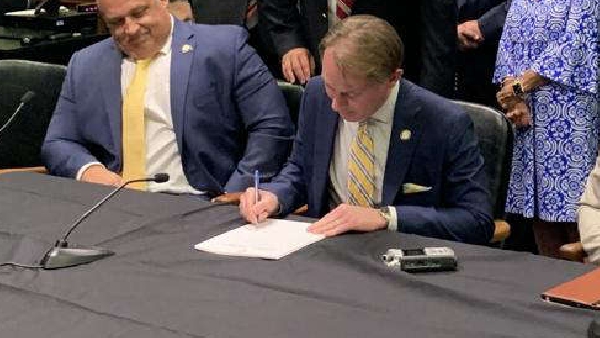 Story Courtesy of our friends at Kentucky Today -FRANKFORT, Ky. (KT) — Supporters held a signing ceremony at the State Capitol on Monday for the Fairness in Women’s Sports Act, which passed the 2022 session of the Kentucky General Assembly after lawmakers overrode a veto by Gov. Andy Beshear.

The law requires students from sixth grade through college to participate in sports based on their biological sex.

“The bill for me was always about fairness and common sense,” said Mills. “Most Kentuckians enjoy their sports and competition. They understand that boys have a physical advantage over girls and that’s just common sense. Kentucky common sense.”

“That was a fight worth fighting for us in the Senate and in the House,” Dodson said. “We just want the young ladies and their parents across the commonwealth to know that we heard you, we stand with you, and we’re here to lift you up and to make sure that you get your scholarships, that you get your playing time, and all the things that come with Title IX.”

Secretary of State Michael Adams signed the bill because, under Kentucky law, when the legislature overrides a governor’s veto, the secretary of state signs that bill into law.

In his April veto message Beshear said, “Senate Bill 83 most likely violates the equal protections afforded by the United States Constitution because it discriminates against transgender children seeking to participate in girls’ or women’s sports.

“Transgender children deserve public officials’ efforts to demonstrate that they are valued members of our communities through compassion, kindness and empathy,” said Beshear.

But supporters of the measure said the new law is a victory for women and girls in Kentucky.

“Because of your hard work and courage to stand, women athletes can compete on a fair and level playing field today,” said Richard Nelson of the Commonwealth Policy Center.

“We’re in an important moment. Biology matters. Truth matters,” said Walls. “When males are allowed to compete in girls’ sports, they take away championships, they take away recognition and opportunity that belong to female athletes.”

Several supporters thanked former University of Kentucky swimmer Riley Gaines, who had spoken out in favor of the bill. Gaines tied for fifth in the 2022 NCAA championships in which she competed against transgender swimmer Lia Thomas in the women’s 200 meter race.