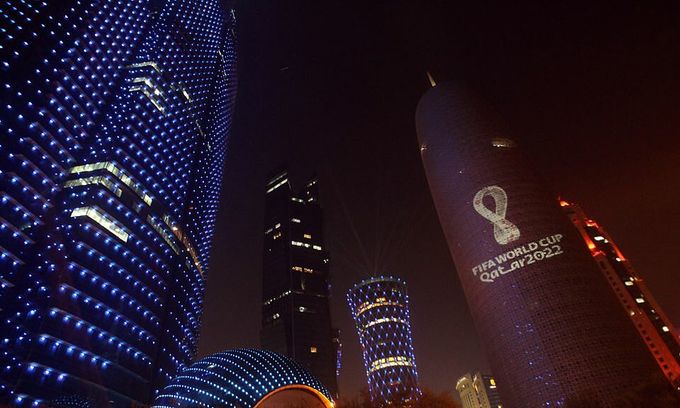 The official logo for the 2022 Qatar World Cup is seen on the Doha Tower, in Doha, Qatar, September 3, 2019. Photo by Reuters/Naseem Zeitoun

Tran Thanh, 43, in Hanoi, a big fan of Argentine striker Lionel Messi, said that after he failed to book a hotel room in Doha, he contacted tour operators to buy a package to watch a match between Argentina and Mexico during the World Cup competition.

However, tour packages involving his favorite match were sold out, so he was considering watching another match.

A VnExpress survey found tour prices to Qatar during the World Cup season can cost up to VND320 million per person for a four-day itinerary, including entry tickets to watch a match.

Travel agencies said the prices include an itinerary to discover Qatar that costs VND150 million while the entrance fee to watch a World Cup match ranges from VND20 to 150 million depending on the match and seat position.

The prices are the highest ever for World Cup packages, the agencies acknowledged. In 2018 when the World Cup was held in Russia, a similar tour only cost VND80 to 100 million.

“The costs of hotel rooms, air tickets and visa fees were raised immediately after FIFA announced the World Cup would be held in Qatar. It was also very difficult for tour operators to reach an agreement with partners,” said Nguyen Hai, who is in charge of selling Qatar tours for Hanoi-based Dat Viet Tour.

“Due to limited hotel options, we had to pay a higher price for early reservation,” Hai added.

Despite expensive tour prices and willingness to foot big bills, many Vietnamese fans have not been able to book the tour desired.

Hai said that for each match, his company only provides a maximum of 25 seats; and some “hot” matches were sold out a few months ago, leaving many Vietnamese football fans disappointed.

A representative of HCMC-based tour operator Vacation Travel said that they had already sold out 15 tour packages to Qatar to watch the World Cup matches with prices starting at VND199 million per person.

HCMC-based agency Hong Ngoc Ha Travel has sold tours to more than 200 customers so far and they have transferred 100% of the ticket prices.

The reason many Vietnamese fans choose to buy a package tour is that booking a hotel on their own during the peak tourism season is next to impossible.

Ngo Tran Hai An, a freelance reporter who will cover the 2022 World Cup, said that he could not book a hotel room in Doha for the World Cup season.

“The capital Doha is quite small and most of the hotels are full. Some people have to go to Dubai to stay or rent a room, though this would be inconvenient and cost more, there is no other choice,” said An.

The 2022 World Cup will take place from November 20 to December 18 in Qatar. It is expected that nearly 2 million people will travel to Doha during the event.

Qatar had earlier announced all foreign nationals seeking to enter Qatar as visitors will need to carry a “Hayya” Card as of November 1, 2022.

Visitors must hold match tickets in order to qualify for the Hayya, which can be applied for online.

For foreign nationals entering Qatar as visitors, the Hayya card will serve as both an entry permit and a stadium access pass. In addition to holding FIFA tickets, foreign visitors will also need to confirm their accommodations in order to obtain a Hayya.